One can chant any one of these mantra’s for a minimum of 7 times a day. If time permits then chanting 108 times will yield better results for those troubled by Shani.

I bow to Lord Shani, who is black in colour and son of Sun and born to Chaya and brother of Yama , who moves very slowly.

According to legend, Shani is a devotee of Lord Shiva. According to the “Navagraha Pidahara Sthothram” of”Brahmanda Purana”, the following sthothra relieves the communicant from all the ill effects of Shani:

The Shanieeswara Mantra In Kannada:

The Shanieeswara Mantra In Telugu:

The Shanieeswara Mantra In Tamil:

The remedies presented here will cover the general nature of Saturn and show the way in which this planet creates troubles. These remedies are traditional mantras found throughout the Vedas, Puräëas, and Tantras.

Saturn is the käraka of suffering as he represents our misdeeds in this and previous lives. It is his job to ensure everyone suffers their bad karma.

The mantras presented here have the power to purify one’s bad karma by washing it clean (Vishnu) or burning it away (Shiva). Vishnu is the

Vishnu is the forgiver of one’s sins while Shiva is the remover/destroyer of our sins.

The nila-shakti associated with Saturn is related to purifying Saturn and teaching him to act properly as a mother disciplines her child.

There are many ways to approach a planet, and how it is approached will be determined according to the intention one has.

This section will reveal mantras for purifying Saturn.

Saturn is naturally slow, blocked, dirty and contracted. Rishi Parashara says that Saturn can be worshipped as Vishnu. By worshipping Saturn as Vishnu, one purifies Saturn, removing the dirt and tamas gunas.

Vishnu is all-pervasive, everywhere. This expansive vibration removes the constricting energy of Saturn which leads to blockages and heavy build-ups. It creates the proper ‘space’ for Saturn to work beneficially in, and ensures that Saturn can give pure, healthy results.

The mantra to purify Saturn is:

This mantra purifies the negativity of Saturn on the lagna and brings the focus and foundational strength of Saturn. When Saturn aspects the D-9

When Saturn aspects the D-9 lagna, it brings older partners into the person’s life; reciting this mantra ensures they are good older people that will help one flourish. By purifying the dirt of Saturn one

By purifying the dirt of Saturn one becomes cleaner themselves (lagna shuddhi) or when Saturn is posited in the D-9 lagna or aspecting it, one gets a ‘cleaner’ spouse.

When the Ascendant Lord is conjunct or aspected by Saturn the dirt appears on the image of a person–acknowledgement is slow to come and they get recognition only later in life. To purify this Saturn, insert çréà

To purify this Saturn, insert ‘srim’ bija into the mantra. This cool and cleansing mantra will purify the ragged, poor energy of Saturn and remove this from the image one projects to the world.

‘Klim’ is käma bija—the desire fulfilling sound added when Saturn is damaging the seventh house or A7.

‘Hrim’ is added when Saturn is conjunct or aspecting the tenth house or causing problems to the A10. Saturn in the tenth can cause falls from high positions in a career.

Saturn with the A10 will make a person work very hard and no matter how hard they work they will be asked to work harder.

When Saturn is with A10 the perception is that the person is not working hard enough. So by chanting to Viñëu with ‘hrim’ béja this Saturn becomes cleansed of its hardness and cleansed of the activities that will make a person fall from a high position.

When natal Saturn afflicts the lagna there are health problems related to vata dosha throughout the native’s life. They will often deal with large amounts of

They will often deal with large amounts of negativity determined by Saturn either placed in the lagna, aspecting it by his third house hammer or his 10th house kick. Saturn’s association with the

Saturn’s association with the lagna will also bring more of the tamas gunas into the person’s life, making them lazy, or sullen, or other tamas attributes.

The remedy for this is worship of the Sun. One can use a short mantra or the famous Savitur Gäyatri mantra which is extremely efficient. By strengthening

By strengthening the sattva guna Sun, käraka of life and vitality as well as the bhäva käraka of the lagna, one removes the depletion of Saturn. The Sun burns off the tamas of Saturn and the body is warmed and strengthened.

‘That’ which is self evident is the highest awakener,
We mediate upon the self-effulgent source which is the illuminator of all,
Please guide all our intelligence and intuition.

Saturn transiting the lagna will cause health problems, as the lord of vata dosha is in the body.

Saturn is vata (air) and depletes the body, making it age faster. Natives will often suffer dental problems or other cases of decay. It may also cause financial difficulties.

The remedy for this is the worship of Shiva in the form of Bhairava. This form of Shiva protects the lagna and purifies toxins and negativities so they do not accumulate. Bhairava brings strength to the body, and

Bhairava brings strength to the body and creates a wakeful energetic mental state. There are a variety of Bhairava forms, Kalabhairava relates specifically to Saturn.

We do not have the ability to give a Kalabhairava mantra (though you are welcome to search for an authentic one).

Batuka Bhairava, who relates to Mars, is just as beneficial as he is a very powerful Bhairava form and specifically protects the lagna.

This is the primary Bhairava worshipped in the ashrams of Hairakhan Babaji.

Aum praises to Shiva, in the form of a young boy,
free from death, protect us from difficulties.

Sani Peyarchi or Saturn Transit according to the traditional Tamil Panchagam followed at Thirunallar Temple occurs on 27th December 2020 and not on 24th January 2020. 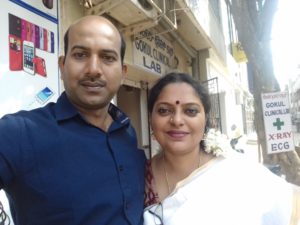 I am a great devotee of Lord Saneeswara. I always feel I have a special connection with Him. He is my Lagna Lord and all my three children were born on a Saturday! I have received many benefits in my life through worship of Lord Shani. To those people who cannot visit the Temple, I offer the service of getting the puja done on their behalf and making sure they get prasadam. I am offering this service since 2011 and have helped people living in over 50 countries. It is wise for everyone to worship Lord Shani and I encourage you to do so today!